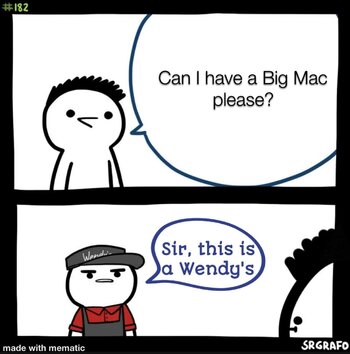 There are different kinds of restaurants: fast food restaurants, coffee shops, pizzerias, etc., and they are all known for serving specific types of food. For the sake of comedy, sometimes characters may go to a restaurant and order a type of food that they wouldn't be expected to have. Or, to take the joke even further, they may try to order food at a business that doesn't even sell food!

Why characters do this depends on this situation. Some characters are just too stupid to comprehend that, say, a Japanese restaurant doesn't sell lasagna. Alternatively, they may do it just to get a reaction out of the restaurant workers. Or maybe the character is just so arrogant that they believe they will be served something special.

This trope seems to be becoming less and less common in real life, due to many restaurants expanding their menus to include items besides the foods they are most well known for.

Literature
Live-Action TV
Music
Newspaper Comics
Standup Comedy
Tabletop Games
Web Original
Western Animation
Other
Real Life
For the last time, this is a wiki, not a fast-food restaurant! We do not serve burgers and fries!