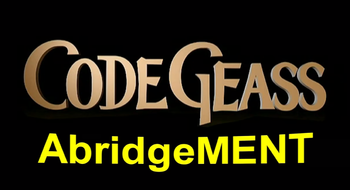 Like Yu-Gi-Oh! The Abridged Series, only worse.
It's official, this shit makes no sense at all.
— C.C, providing the shortest and most accurate description of the show
Advertisement:

Code MENT is a Code Geass Abridged Seri—er… abridgement, created by PurpleEyesWTF (also the creator of None Piece), and is one of the most bizarre abridged series out there. It combines standard abridging with faster-paced, nonsensical comedic editing to create a very unique flavor reminiscent of Monty-Python sketch comedies, but without censorship. Code MENT very loosely follows the actions in the original series – in general, while the events and outcomes are the same-ish, characterization and motivations are jettisoned for the sake of comedy, with all the characters acting considerably more stupid, and editing scenes from several episodes or other series into the continuity, creating a melting pot of insanity. The series is considered a "parody of a parody".

While it sounds wacky on paper (and is even wackier onscreen), PurpleEyes is known to hold himself to high standards for a YouTube abridger. The series is notable for PurpleEyes's impressive voice-work (giving each character in a cast well known to contain many characters his or her own distinct voice), its fast-paced humor, high-quality editing, and excellent comedic timing.

Sixteen episodes were released, not counting the re-edits, of which there have been two: Episodes 10 and 13. Watch it here.

The non-canon "fifth" episode of None Piece is also considered the equally non-canon episode 14.5 for Code MENT. There were plans for at least nineteen episodes, with the ninteenth set as a Grand Finale, but the series has ultimately died due to PurpleEyes having real life obligations to take care of.

It became another progenitor for a new wave of abridging series, just like Little Kuriboh, known as abridgeMENTs, with distinctive voice actors, fast-paced non-sequitur humor, heavy editing, and pushing the envelope to its breaking point. So far, Supernatural: The Animation Abridged, Infinite MENT and Medaka MENT follow the mold.

WHY ARE YOU BUYING TROPES AT THE SOUP STORE?
Feedback

Nunnally warns Mao that Lelouch will rescue her, no matter what. Except that Lelouch is too busy doing... whatever the heck he's doing that doesn't help him find his sister.

Nunnally warns Mao that Lelouch will rescue her, no matter what. Except that Lelouch is too busy doing... whatever the heck he's doing that doesn't help him find his sister.