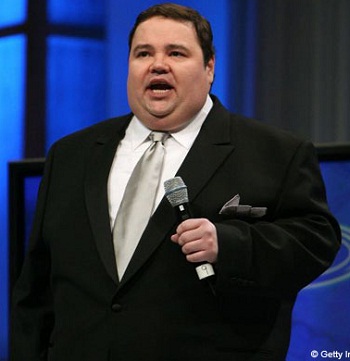 John Paul Pinette (March 23, 1964 – April 5, 2014) was an American actor, Broadway performer, and stand-up comedian. He toured the comedy club circuit beginning in the 1980s and appeared in cinema and on television.

French-Irish comedian (his stomach was Italian). His jokes centered on his health, food, his travels, food, society, and food. Especially food. Also a talented singer.

...And for all that, he was probably best known as the carjacked fat guy in the series finale of Seinfeld.

Pinette died of a pulmonary embolism at a hotel in Pittsburgh, Pennsylvania on April 5, 2014, just days after his 50th birthday.