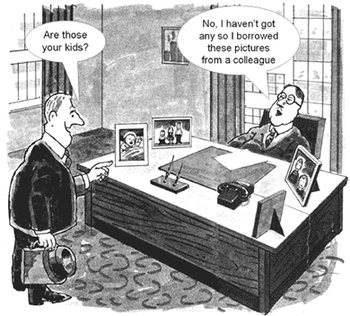 ... and ye shall receive a stupid answer.

You know how obnoxious Captain Obvious can be. You just want to yell at them and say, "Any blind idiot can tell what's going on!" But then there are those idiots who think they can tell what is going on, but ask a stupid question just to verify.

This is not only when that question is asked, but to the frustrated individual this is their chance to strike back with a non-sequitur, either in a Deadpan Snarker retort or full on Mind Screw confusion. A specific variation of Sarcasm Mode.

While examples on this page are of In-Universe instances of this type of exchange, this is certainly a staple of MSTing by pointing out where people are being oblivious to their dialogue (or being repetitive in them). For example: "This is a map to Hammunaptra." "The Hammunaptra?" "No, the one in Jersey."

Bill Engvall's "Here's Your Sign" routine was dedicated to these exchanges. MAD also had a section called "Snappy Answers To Stupid Questions" written by Al Jaffee.

Of course, if you decide to avert the inevitable sarcastic retort by not seeking explicit confirmation that your friend with the house full of boxes is actually moving, nine times out of ten it will turn out (after a generous helping of Poor Communication Kills) that he is just having the house fumigated.

An attempt to maneuver someone into asking a stupid question for the purpose of delivering a snappy answer is What's a Henway? When the stupid answer is, in fact, correct, it's Don't Be Ridiculous. See Stupid Question Bait and Rhetorical Question Blunder for similar concepts, as well as You Answered Your Own Question (where the question somehow contains the answer, like "What's the number for 911?")

Dorothy has no time for Rose's shit.

Dorothy has no time for Rose's shit.