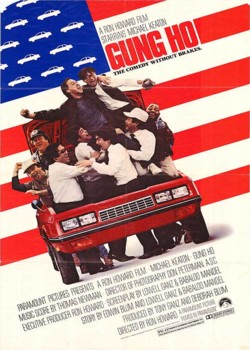 Gung Ho is a 1986 Ron Howard comedy starring Michael Keaton and Gedde Watanabe. It was released as Turning Japanese in some overseas markets.

Hadleyville, Pennsylvania, is fading fast. The car factory, engine of the local economy, has closed down, and former autoworker and local union head Hunt Stevenson (Keaton) is sent to Tokyo to attract Assan Motors to take over the plant. They do, and the town is saved, but now the American autoworkers and the Japanese management will have to somehow learn to work together in spite of their cultural differences. Hilarity Ensues.

The film was later made into a TV show with Gedde Watanabe and Scott Bakula.