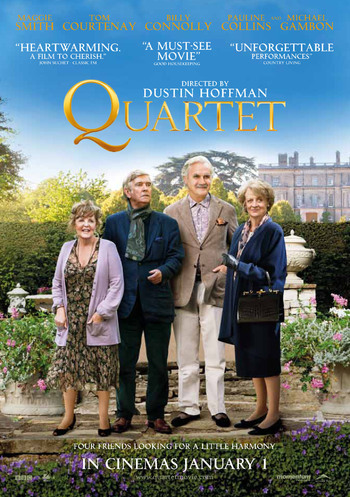 Quartet is a 2012 film starring Maggie Smith, Tom Courtenay, Billy Connolly, and Pauline Collins, directed by Dustin Hoffman. The film focuses on the residents of Beecham House, a retirement home for professional musicians, and their efforts to put on an annual fundraising concert in honor of Giuseppe Verdi's birthday. If the concert is not a success, Beecham House will not be able to afford to stay open. Their only hope for drawing a big enough audience is for four old friends to reform their old quartet and perform their famous rendition of Rigoletto.

Only two problems: Jean wants to avoid singing in public again, feeling she is past her prime, and Reg is still heartbroken over Jean's act of infidelity decades before.