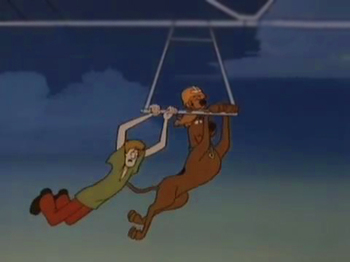 After the initial success of Scooby-Doo and Scrappy-Doo, the series went under a massive retool, eliminating Velma, Daphne and Fred, and reformatting the show to a “Three Shorts” format with Richie Rich, as opposed to one single mystery story. Also considered seasons 2–4 of its predecessor, it endured for three seasons before undergoing another retool. The final season also contained a separate set of shorts that went under the name Scrappy-Doo and Yabba-Doo.

The shorts originally aired as part of The Richie Rich/Scooby-Doo Show and The Scooby & Scrappy-Doo/Puppy Hour, and were later repackaged as Scary Scooby Funnies and Scooby's Mystery Funhouse. Modernly the name "The Scooby & Scrappy Doo Show" is the name mostly used and with just the Three Shorts airing to the half-hour with a slightly altered version of the previous show's opening credits.

Tropes Found in The Scooby-Doo and Scrappy-Doo Show:

Tropes Found in Scrappy-Doo and Yabba-Doo: