Literature / The Phantom of the Opera 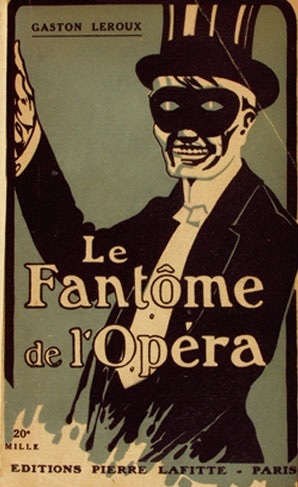 The Phantom of the Opera was a novel by French author Gaston Leroux, published in serialized form in 1909 and 1910. Leroux tells what he insists is the true story of a young soprano, Christine, who believes she is being tutored by the "Angel of Music", sent to her from Heaven from her deceased father. Originally considered nothing special, especially compared to her rival and the opera's resident diva, Carlotta, after three months under the Angel's tutelage, Christine shines. The managers quickly realize the depth of her talent... and so does Christine's childhood best friend, Raoul, who sees her in all her newfound glory and realizes that She Is All Grown Up.

After a show, Raoul is eager to be reacquainted with Christine, but she is kidnapped by the Angel (really the titular Phantom) and taken to his lair. There, the Phantom puts her under his spell with his music and tells her that he wants her for his bride. However, when Christine takes off his mask to reveal his disfigurement, the Phantom throws her out in shame.

Shortly afterwards, Raoul and Christine become engaged. The Phantom overhears them, and decides to win Christine's love, once and for all... or, failing that, punish them both for their arrogance.

Also has had a good number of adaptations throughout the years.