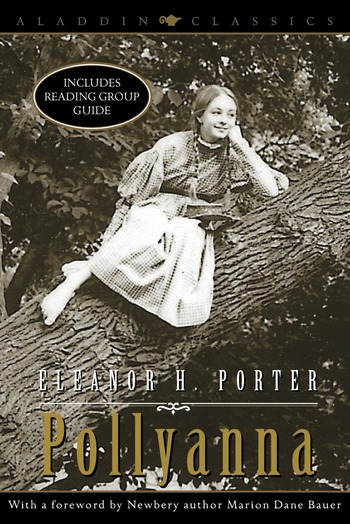 If you're looking for the character type, go to The Pollyanna.

Pollyanna, a 1913 novel by Eleanor Porter, is the first of a series of thirteen novels known as "The Glad Books", about an orphaned girl living with her aunt in the early 20th century. Young Pollyanna Whittier goes by a philosophy called "The Glad Game" where she finds something to be glad about in every situation. Combined with her sunny personality, her presence helps to reform her dismal town and, most effectively, her miserable aunt.

The novel was an instant success, warranting twelve sequels by different authors and passing the name "Pollyanna" itself into the vernacular to describe the archetype she embodies. It was adapted into Movies and TV series several times including a 1920 silent movie starring Mary Pickford, a 1986 Anime series as part of the World Masterpiece Theater series and perhaps most famously made into a film by Disney starring Hayley Mills as well as a 1989 TV movie (and its 1990 sequel) also released by Disney featuring Keshia Knight Pulliam from The Cosby Show as Pollyanna. The 1960 and 1989 movies differ significantly from the books, both in the main plot and in characterizations.

After Porter abandoned the "Glad Books" series, it was taken over by first Harriet Lummis Smith, then Elizabeth Borton, Margaret Piper Chalmers and finally Virginia May Moffatt. Later books took Pollyanna into marriage, motherhood and war, not to mention living in places as disparate as a tenement in New York, a castle in Mexico, and Hollywood - playing "The Glad Game" and warming others' lives along the way.