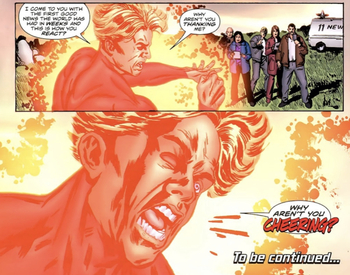 "Let me tell you the kind of world I live in. It is a world of miserable, bitter, ungrateful paramecium who lash out at you in a state of perpetual rage for not solving their problems fast enough."
— The Plutonian, Irredeemable
Advertisement:

So, you're a hero who's a fair way through your quest. You've slain fire-breathing dragons, or assassinated mob bosses, or torn apart an army base filled with hostile aliens. You've cut a swath through the land, slaughtering anything or anyone who gets in your way and spit in the face of impossible odds. You're well on your way to finishing the job. When you need a favor, anybody who knows who you are should be too grateful or too afraid to turn you down. But instead...

"Go clean out my stables."

"Go throw around some Cuccos."

"Go collect some apples from my garden."

"Go beat up this guy that's been hassling me."

"Don't you know who I am? Where's my respect?" Of course, you've got no choice but to debase yourself and comply with this humiliating request, even though you've probably gone From Nobody to Nightmare and by rights you should just kill them and take what you need. Is a little empathy so hard to muster? Also, don't expect merchants to give you a discount or something because you're a known hero and benefactor. Hell, some will even try to charge you more because you're famous.

An Ideal Hero will fetch cats from trees all day long, but then again they're probably either a Slave to PR or just plain have nothing better to do between beating the tar out of villains. Expect villains, rivals, and some civilians to act like Ungrateful Bastards in part because of this; in extreme cases they may say "Then Let Me Be Evil." The Glory Seeker hates this. Conversely, the Humble Hero will receive praise, but brushes it off saying, "Think Nothing of It" or "All a Part of the Job."

Particularly nasty ones are Impossible Task. Compare No Fame, No Wealth, No Service. Often crosses with Hero with Bad Publicity. Contrast Famed In-Story, 100% Heroism Rating, and The Player Is the Most Important Resource. See Entitled Bastard, who usually delivers this.

On the other hand, someone may have this attitude when they've actually done no more than the bare minimum. Granted, if he's a Jerkass making an effort to do something nice for a change, he may have exceeded expectations, but this still has shades of believing It's All About Me. See also Dogged Nice Guy.

When this happens to the heroes over the course of multiple stories, the culprit is usually Status Quo Is God. In order to keep the setting and its characters consistent from beginning to end, or at least without huge changes, it's necessary for the characters other than the heroes (and often the heroes themselves) to behave much the same as when the series got started.

Please restrict Real Life examples to people who have been Vindicated by History already. As Truth in Television as this is, it's normally too personal to be considered.

After she's been declared to be eliminated, she bludgeons everyone for not recognizing or accepting her as a life savior, and apparently threatens to go back to her old ways.

Alternative Title(s): Dude Where Is My Respect

After she's been declared to be eliminated, she bludgeons everyone for not recognizing or accepting her as a life savior, and apparently threatens to go back to her old ways.