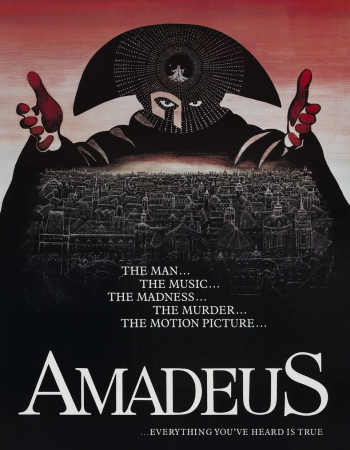 "Are we going to appall you with something confidential and disgusting? Let’s hope so. Because that is what you really like. Unconfessed crimes of varied wickedness. If that is what brings you to us, the prospect of hearing horrors, you shall not go unrewarded."
"On the page it looked nothing. The beginning simple, almost comic. Just a pulse – bassoons and basset horns – like a rusty squeezebox. Then suddenly – high above it – an oboe, a single note, hanging there unwavering, till a clarinet took over and sweetened it into a phrase of such delight! This was no composition by a performing monkey! This was a music I’d never heard. Filled with such longing, such unfulfillable longing, it had me trembling. It seemed to me that I was hearing a voice of God."
—Salieri
Advertisement:

Amadeus is a 1979 stage play about the life of Wolfgang Amadeus Mozart written by Peter Shaffer, adapted into a film in 1984 by Shaffer and director Miloš Forman. It is based off of an 1897 one-act opera by Nikolai Rimsky-Korsakov, Mozart and Salieri, which is in turn based on an 1830 drama of the same name by Alexander Pushkin. This article deals mainly with the film.

Taking some liberties with historical accounts, the story is told from the point of view of Antonio Salieri, the court composer for Austrian Emperor Joseph II. A devout and serious man, Salieri's faith is shaken when he meets Mozart. Though Mozart proves to be a tremendous boor and an immature Manchild, his godlike musical talents win the affections of the court and the audiences while simultaneously moving and infuriating Salieri with their genius. That the boorish Mozart could create such magnificent, groundbreaking compositions with seemingly little effort, while Salieri had to struggle to get to where he was, drives him to undermine Mozart any way he can. Sometimes, he even succeeds.

The story and its relationship to actual history is often misunderstood. The story is about the supposed secret history of Salieri and Mozart, and works on the idea that recorded history is different because it has been duped. In Real Life Salieri and Mozart were good friends and Salieri was a respected composer, but in this movie Salieri and Mozart are also good friends and Salieri is still a respected composer... as far as everybody else knows, Mozart included. The premise is that the only one who knows the real truth is Salieri, who is far too wallowed up in self-pity to appreciate his lot in life (which is, on the whole, pretty good) but is also enough of a Villain with Good Publicity that by the end he, and only he, really knows the extent of his bastardy (bar the priest he confesses to).

Amadeus brought a considerable revival of interest in the life and work of Antonio Salieri. Mozart in particular, and classical music in general, also got a nice little boost, but Mozart was quite well known already. The film also went on to be a sensation at the Academy Awards, winning Best Picture, Best Adapted Screenplay and Best Director, and garnering dual nominations for both F. Murray Abraham as Salieri and Tom Hulce as Mozart. Abraham won.

The famous Falco song Rock Me Amadeus was directly inspired by the movie.