Film / And Quiet Flows the Don 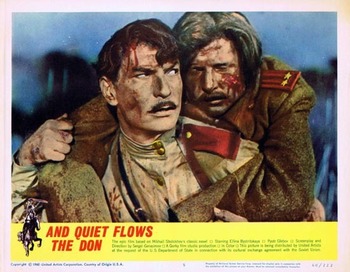 And Quiet Flows the Don is a film from the Soviet Union, directed by Sergei Gerasimov. 330 minutes long, presented in four parts, it was originally released as three separate films in October 1957 and April 1958. The film tells the story of World War I, Red October, and the Russian Civil War, as seen from the perspective of Don Cossacks

. The protagonist is Grigori "Grishka" Melekov, a Cossack cavalryman with the tsarist army, who lives in the village of Tatarsk on the Don River. Grigori has taken a fancy to Aksiniya, a local village woman, which is unfortunate since she is married to Stepan, another cavalryman. Meanwhile, Grishka's parents are trying to set him up with Natalya, who is both very pretty and fortunately unmarried.

This is all a backdrop to portray the violent upheavals in Russia and Ukraine from 1914 to 1922, as the area was wracked by war, revolution, and more war. And Quiet Flows The Don is based on the similarly epic novel series by Mikhail Sholokhov.