Theatre / The Marriage of Figaro 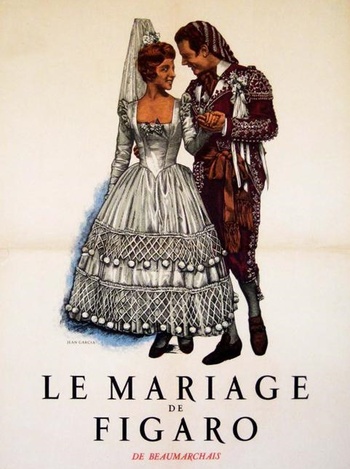 A comic, Sitcom-like play by Pierre Beaumarchais ("Le Mariage de Figaro" in the original French), adapted into an opera by composer Wolfgang Amadeus Mozart and librettist Lorenzo Da Ponte ("Le Nozze di Figaro" in the original Italian). The story is about the attempts of Figaro (Count Almaviva's manservant and formerly The Barber of Seville) and Susanna (the Countess's maid) to get married. It being a Romantic Comedy, there are many obstacles:

Of course, since this is comic opera, everything works out in the end. (And yes, it's still hilarious today, if it's played right.)

The opera is based on a play by Pierre Caron de Beaumarchais, a sequel to his The Barber of Seville, which tells how Figaro entered the Count's employ after helping overcome the difficulties surrounding the Count's own attempt to Marry for Love. The Barber of Seville was also adapted into opera several times, most notably 30 years after The Marriage of Figaro, by a different composer (Rossini) and a different lyricist. Essentially it is a Continuation Fic in the other chronological direction. As mentioned on the Barber page, there is a third play in the series, but nobody cares about it anymore.

Figaro was unusual for being essentially a Lower-Deck Episode: the Official Couple aren't nobility or anywhere near the top of the power structure. Of course, this makes up for the fact that Figaro wasn't the star of Barber, even though it's named after him.

This opera provides examples of: