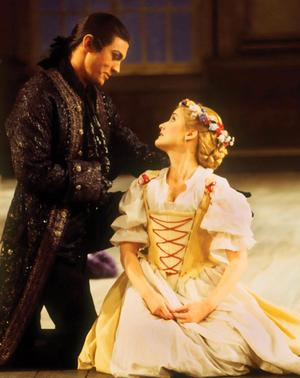 There we will entwine our hands / There our "yes" we shall share / Not far away my home stands / Come, dearest, let us go there.
"A greater talent than mine is not in this world!"
Advertisement:

Don Giovanni, or the Rake Punish'd is one of the most famous versions of the Don Juan legend and the second joint venture of the composer-librettist team of Wolfgang Amadeus Mozart and Lorenzo Da Ponte. As a dramma giocoso (a genre-busting mix of comedy and drama), the opera tells the story everyone has heard of and no one actually can narrate beyond saying that the protagonist is The Casanova, while the Don Juan legend is in fact much older.

In short, the plot covers a single day where everything that can go wrong does go wrong for the hero and can most easily be presented through its characters:

A good way to tell when the plot is going to get dramatic is to watch for whenever Ottavio, Anna or the Commander appear; the other supporting characters are mostly comical. The plot itself is full of twists, so go to our synopsis to read it.

Leporello: Forsake this TV Tropes page!
Giovanni: Forsake TV Tropes?! Madman! I need them more than the air I breathe, the bread I eat!