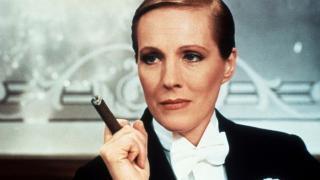 They'll know HE'S a phony.
Ronnie Barker: You'll have to bear with me, because remember, I'm a woman playing a man who is playing a woman.
Ronnie Corbett: Oh, at least.
— The Two Ronnies, "Ball and Socket"
Advertisement:

A character or actor disguises their gender. For some (frequently contrived) reason they then have to re-disguise themself as their real gender. And then re-re-disguise as their fake gender, and so on until they collapse into a singularity of androgyny. Often, another character — who may have been Sweet on Polly Oliver — will comment on how unconvincing the second act of crossdressing is, revealing how completely he was fooled by the first.

Often this overlaps with Paper-Thin Disguise and Wholesome Crossdresser.

A Sub-Trope to Genuine Imposter.