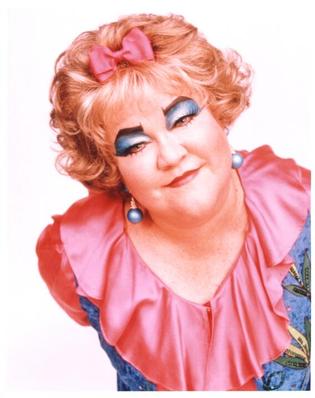 Some ladies wear Cover Girl, she wears Dutch Boy.
"Ronald Reagan is a triumph of the embalmer's art."
— Gore Vidal

Generally, people use cosmetics to make themselves more attractive. A little extra color or definition can make a world of difference. In the wrong hands, however, or taken too far, that dab of lipstick, powder, and paint can push a person straight into the Uncanny Valley. The human face disappears into the make-up, leaving something profoundly unnatural: a clown, a porcelain doll, or a something just plain grotesque.

This is disconcerting enough even if accidentally incurred in an honest effort to achieve perfection — if a character cultivates Uncanny Valley Makeup on purpose, like the semantic colors on a venomous snake, be on the alert for serious, premeditated creepiness.

Bonus points if the person is wearing an old fashioned Pimped-Out Dress, a frivolous multicolored outfit, or an all black outfit. Or they may also dress in a skimpy outfit that was intended purely for Fanservice.

Depending on the circumstances this trope can be considered a good source of Nightmare Fuel or Fan Disservice.