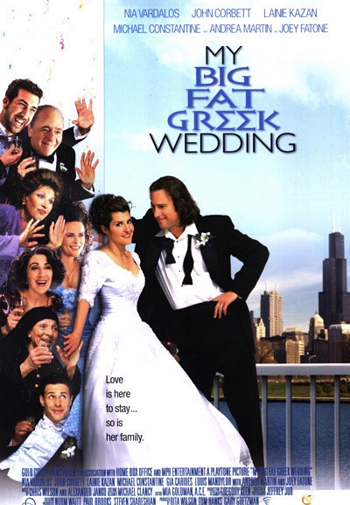 "Nice Greek girls are supposed to to do three things in life: marry Greek boys, make Greek babies, and feed everyone... until the day we die."
— Toula Portokalos
Advertisement:

My Big Fat Greek Wedding is a 2002 romantic comedy film written by and starring Nia Vardalos, based on her one-woman show of the same name. It was directed by Joel Zwick and produced by Tom Hanks and his wife Rita Wilson.

Toula Portokalos is a single thirty-year-old Greek-American woman living with her parents and brother in a close-knit Chicago Greek community and working in the family's Greek restaurant. They even have a Greek statue in their front lawn and proudly emblazoned the Greek flag on their garage door. Deciding to invigorate her life, she breaks out on her own to go to college and start working at a travel agency. She also gets a makeover, taming her wild hair and getting contacts.

In this new lifestyle she meets the handsome, charming but non-Greek Ian Miller. They fall for each other and decide to get married. Her dad does not approve; how could she possibly marry a non-Greek?

Nevertheless, things get sorted out and a huge and very Greek wedding is planned...

It was followed up by a TV sitcom, My Big Fat Greek Life, which only lasted seven episodes.

A sequel, My Big Fat Greek Wedding 2, was released on March 2016 and focuses on the wedding of Gus and Maria who find out they were never legally married.