Film / Mom and Dad Save the World 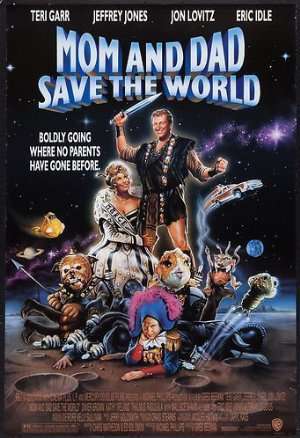 "Today Marge Nelson becomes Marge Spengo!
And all across the planet, our hearts will do the tango!"
Advertisement:

Mom and Dad Save the World is a 1992 film parody of Flash Gordon which stars Jon Lovitz, Teri Garr, Jeffrey Jones, Eric Idle, Thalmus Rasulala, Kathy Ireland and other actors. Lovitz plays Emperor Tod Spengo, who is the cruel, silly and over-dramatic emperor of the planet named Spengo (which Spengo conquered and renamed after himself). Teri Garr plays Marge Nelson and Jeffrey Jones plays Dick Nelson, her husband.

Emperor Tod Spengo, with General Afir at his side, takes over a small planet at the edge of the galaxy populated entirely by idiots, and renames it after himself. He orders that all the resources of the planet should be engaged to create his "Death Ray Laser". The laser's purpose is to destroy Earth, thus making Spengo the greatest planet in the Universe. When Emperor Spengo looks at exactly where his Laser would strike, he sees Marge Nelson exercising — and falls in love.

Using his Magnobeam (a giant magnet), he kidnaps Marge and her husband Dick as they are on their way to a 20th-anniversary weekend. He hopes to make Marge his before he blows up the Earth. Dick and Marge get separated on Spengo; Marge is sent to the lap of luxury, waited on by small people with fish or dog heads, while Dick is thrown into a dungeon. Can Dick find his way back to Marge? Can the rightful king of Spengo retake his throne? What the hell were Chris Matheson and Ed Solomon smoking when they wrote this?