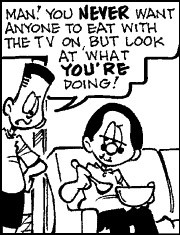 Ariel: You deliberately disobeyed me! I never want you going out there again, do you hear me? It's dangerous in the sea!
Lindsay: Oh, Ariel, you might be a hypocrite or something.
— The Nostalgia Chick on The Little Mermaid II: Return to the Sea.
Advertisement:

You've probably heard that old saying, "Do as I say, not as I do."

Mom just doesn't understand! She tells our heroine off for going out with the wrong boy or having a secret life, etc. Then, we find out in a dramatic twist that she did the same thing when she was her age! What a hypocrite! But, of course, having seen her hypocritical ways, we love her again or she sees her wrong-doing and allows the act to continue. Or doesn't.

The other case is when the parent has forgotten what it's like to be a teenager. In this case, some other adult their age will remind them, "you were a teenager once, don't you remember?" prompting the parent to guiltily admit they remember, and that's why they're being so overprotective.

Note that this trope isn't necessarily a bad thing: the parents went through the same thing their children are facing, learned from it, and now they want to keep their kids out of the same situations. The parents look upon the situation with regret and want better for their children. Not stopping to remember how much they'd heed such advice in their time, of course. This trope only focuses on the fact that the parent did the same as the child and it is considered a "twist" in the story.

On the other hand, the unsympathetic side of this is when the parent disciplines the child for doing something that they still do as a parent, rather than something they did as a kid, learned a lesson from, and don't do anymore.

No Real Life Examples, Please! While this trope is indeed Truth in Television, it would be filed with natter and complaining about parents who engage in hypocrisy.

This can be a subtrope of Generation Xerox, as the parent or guardian involved is often a Former Teen Rebel. It can also be a subtrope of Hypocrite Has a Point, where someone is still shown to be right in spite of their hypocrisy. Compare Evil Parents Want Good Kids. Naturally, this can make it harder to Honor Thy Parent.