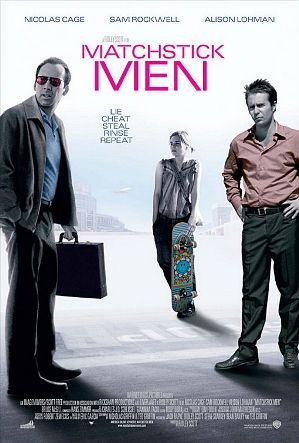 Matchstick Men is a 2003 Black Comedy and Drama based on a book by Eric Garcia and is directed by Ridley Scott. It stars Nicolas Cage, Alison Lohman and Sam Rockwell.

Cage plays Roy Waller, an obsessive-compulsive, agoraphobic, germaphobic con-artist residing in Los Angeles. His partner is Frank Mercer (Rockwell). The two operate a fake lottery, selling overpriced water filtration systems to unsuspecting customers; in the process, Roy has collected over one million dollars and has developed a crush on Kathy (Sheila Kelley), a cashier at a local supermarket. Roy was married long ago; his wife, Heather (Melora Walters), was pregnant at the time he divorced her. After Roy has a violent panic attack, Frank insists he see a psychiatrist. The psychiatrist, Harris Klein (Bruce Altman), contacts Heather, and reveals that Roy has a daughter, Angela (Lohman). Not long afterwards, Angela turns up on Roy's doorstep. It seems she wants to get to know the father she never had, and also, that she wants in on his and Frank's upcoming con...