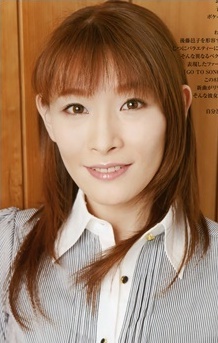 Yūko Gotō (born August 28, 1975 in Aichi Prefecture, Japan) has the voice of a Nice Girl, but is a damn competent biker in Real Life. She's also a fluent English-speaker, which means she gets cast as foreign characters a fair bit. (She studied at a university in Nagoya to be an English translator, but dropped out to go into TV production work.)

Gotō first gained recognition in her Yandere role as Kaede in SHUFFLE! However, with that said, her roles in Haruhi Suzumiya and Hidamari Sketch shot her to fame and basically made her the go-to lady for sweet, kind-hearted ladies who may (or may not) have something up their sleeves. Of course, considering her Badass Biker real life background, they make fun of it in Lucky Star. Apparently likes Fist of the North Star and her favorite character is Souther/Thouther, which led to her pseudonym in Lucky Star: "Gothouther-sama".

Apparently, Gotō is sick and tired of people treating her like a sweetie just because she is good at playing the role. If you do, be prepared to get hurt really REALLY HARD.

Recently appointed as one of the heads of the Hokuto Musou game. She is also known for forming the "Forever 29" movement, similar to Kikuko Inoue's "Forever 17", only that, you know, say "Always 29 years old."

and Lupus, having diagnosed of the former as a teen), and in mid-2012 she got sent to the hospital due to a flare-up affecting her heart, lung and vessels. She was on a hiatus for two and a half months and was only out in late September. Thankfully by October 4th, she managed to recover and return. Unfortunately, the chronic nature of her condition continues to seriously affect her voice acting, so may we wish her the best. While she is still active in the voice acting industry, her constant health problems have severely slowed down her career after 2012.