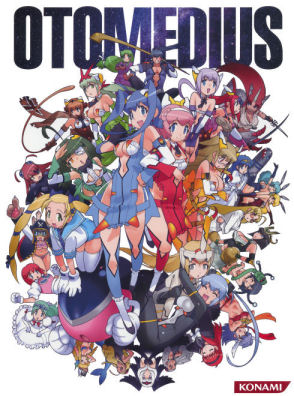 Can you find the man in this cast?
Advertisement:

Konami's combination of its own Parodius and Gradius series. A lighthearted Self-Parody, Otomedius is a Boob Shooter with its own standalone plot. It pulls elements from several of Konami's other properties, including Ganbare Goemon, Busou Shinki, Xexex, TwinBee, Parodius and, of course, Gradius itself.

Anoa Aoba, a second year high school student, is approached by a mysterious organization and offered a chance to pilot Vic Viper. While you might expect a Cool Plane, this one is less a plane and more a flying motorcycle. She's also introduced to the other "Angels" who form up the Five-Man Band.

What follows is adventure. Across the world, across space, across dimensions, involving a lot of bullets, a lot of enemy robots, and a lot of penguins.

If there isn't an Everything Is Better With Boobs trope, there should be, because this series lives in it. How about Refuge in Cleavage?

The series saw two console releases, both for Xbox 360: Otomedius Gorgeous, a port of the original arcade game, and Otomedius Excellent, a console-only sequel. Konami announced a North American release of Otomedius Excellent for 19 July 2011, but it got delayed for quite a while until, ultimately, it came out at 3 November 2011.

Now has its own Character page (Under Construction)