Visual Novel / We Without Wings 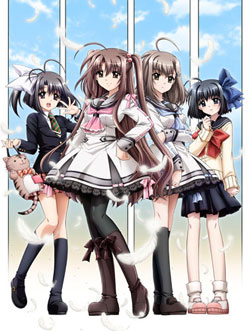 We, Without Wings: Under the Innocent Sky starts in Yanagihara City, where three stories playing out in parallel. The first is Takashi Haneda, who has to deal with his little sister Kobato and Asuka Watarai, his girlfriend...maybe, all while dreaming of a fantasy land called Gretagard. The second is Shusuke Chitose, a freeter who's pals with Karuo Karube, the bartender at Alexander, a restaurant where he's in an unsteady relationship with a fellow employee, Hiyoko Tamaizumi. The third is Hayato Narita, who's captured the attention of Naru Ootori, younger sister of his acquaintance Kakeru, who's looking for her bike. What do these three have in common? Overseen by the mysterious DJ Condor, a story begins.

Originally a Visual Novel by Navel (SHUFFLE!, Soul Link), We, Without Wings, was adapted into an anime in spring 2011.