Manga / We Were There 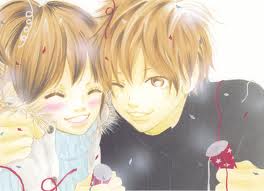 Because the opposite of love is not always hate...
''It's easier to put the blame on yourself. When you blame others, you becoming stubborn, saying you'll never forgive... but if you blame yourself, there's nothing you can do about it. So you don't get mad.
— Yano Motoharu
Advertisement:

We Were There (Bokura ga Ita) is a shoujo romance manga by Yuuki Obata. It was serialized in Betsucomi from April 2002 to February 2012 (though with several hiatuses during its run), and compiled into 16 volumes.

The story follows newly-turned high school freshman Nanami Yamashita, who joins a class mesmerized by the extremely popular Motoharu Yano. At first, she despises his carefree attitude, but soon she falls in love with him. However, once she starts to discover what's beyond Yano's cheerful exterior, she encounters a deeply wounded young man who stopped believing in love after a traumatic incident regarding Nana Yamamoto, the older sister of resident bookworm Yuri Yamamoto. A seemingly innocent romance will soon develop into a tearjerker story of betrayal, loss, and over everything, love.

The series is licensed for an English language release in North America by Viz Media. It was adapted into a 26-episode television anime series by ArtLand which aired from July 3 to December 25, 2006. The episodes were released to nine Region 2 DVD volumes by Pony Canyon, with each volume containing three episodes, except the final volume which contained two. The first volume was released on October 4, 2006 and the last on June 6, 2007. A live action film adaptation divided the story into two parts released on March 17, 2012, and April 21, 2012.

In 2005, the manga won the Shogakukan Manga Award for shoujo.