Manga / The Way of the Househusband 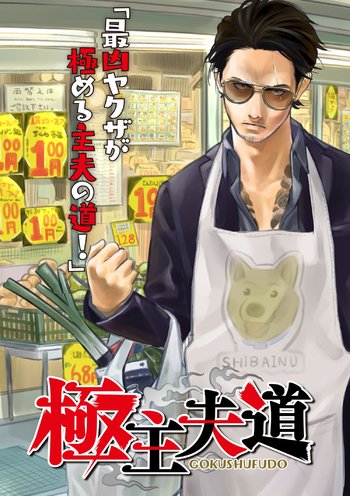 "The Immortal Tatsu": A Yakuza so infamous that simply hearing his name struck fear in the most hardened cops, criminals, and Yakuza members alike. One day he vanished, only to turn up later... as a House Husband?

The Way of the Househusband (Gokushufudou) follows the Immortal Tatsu, a dyed-in-the-wool badass ex-yakuza thug, who uses his grit and determination cultivated from his former life in his new marriage with his career woman wife, Miku. Hilarity Ensues.

The manga, created by Kousuke Ono, began serialization in the Kurage Bunch publication in 2018 and is still ongoing. Viz Media has licensed the manga in the United States, and began releasing an official translation in September 2019 under the title The Way of The Househusband.

A live-action TV series starring Hiroshi Tamaki as Tatsu premiered in Japan in October 2020. An anime adaptation premiered on Netflix in 2021, with Kenjiro Tsuda reprising his role as Tatsu.

The boss keeps berating his underling for ordering silly stuff at the cafe. Then his own order arrives.

The boss keeps berating his underling for ordering silly stuff at the cafe. Then his own order arrives.