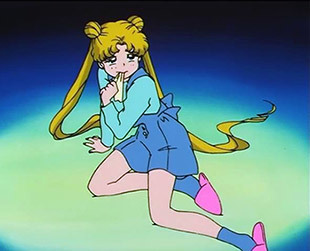 So sad, yet so delicious.
Advertisement:

When mere tears simply aren't enough to indicate how melodramatically melancholy a character is, they can show just how upset they are by clenching the center of a handkerchief in their teeth, gripping the rest of it in their hands, and stretching it tightly as they weep. Sometimes, when things go completely south, the character may inadvertently tear the center right out of the handkerchief, the torn patch of cloth dangling from their teeth like a dog that's just taken a bite out of the mailman's backside.

Almost always an indicator of over-the-top comedic levels of sadness. Almost always reserved for cute female characters. This can, however, rarely occur in the chivalrous guy of the group.

Not related to Returning the Handkerchief, and has absolutely nothing to do with "biting the pillow".