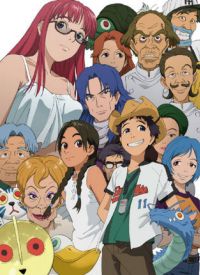 "All things extant in this world: Gods of Heaven, Gods of Earth, let everything be as it should be. Thus shall it be!"
Advertisement:

Arumi and Sasshi are two twelve-year-olds who have grown up together in the Abenobashi shopping arcade in Osaka. But the arcade and the neighborhood around it are now slated for redevelopment; one by one, the old familiar buildings are being torn down. Worse, Arumi and her family are moving to Hokkaido. What's poor Sasshi to do?

Well, none of that really matters, after Arumi's grandfather is hospitalized in an accident that destroys the last of four "guardian" figurines that bound the shopping district. Before their eyes, the neighborhood changes. Sasshi and Arumi find themselves trapped in a warped version of Abenobashi, as if it were an RPG, with everyone they know recast as NPCs.

But once they fight their way through the game's plot in grand slapstick style, thinking they will then return home, they find themselves transported to an outer space version of Abenobashi... then a Hong Kong martial arts movie version... then a dinosaur-filled, prehistoric one. And many more. Will Sasshi and Arumi ever get back to the real Abenobashi? Why are they "jumping" in the first place? Who is that blue-haired sorcerer who appears to be going through a mid-life crisis?

A Deconstructive Parody of a dozen or more genres of film and anime, Abenobashi Mahou Shoutengai (Magical Shopping Arcade Abenobashi in North America) generously trowels thick layers of off-the-wall comedy on top of a surprisingly serious storyline, one you're likely to forget about. Made by Gainax and Madhouse, the show makes both subtle and in-your-face references to various other series.

There is also a two-volume Manga version, which is even weirder. The basic plot is pretty much the same, although different worlds are visited, the ones that are in the show are different, and there's a character not shown in the anime (with the exception of a "blink and you'll miss her" scene in the twelfth episode). While unfortunately the manga is no longer in print due to the demise of Tokyopop, cheap used copies can be found on Amazon, or if you're lucky, your local used bookstore.