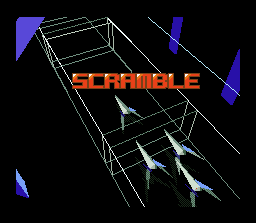 Rule of Cool insists that when a bunch of fighters (planes, spaceships, or even Mecha), go into battle, you always have to see them taking off first. Always.

There are several reasons for this. One is the sound of the fighters starting up. There is something very evocative about fighter engines — the promise of power and danger right there in the turbine's whine (or the exhausts' roar). Science fiction versions of the trope will have the fighters make a very similar sound despite not running on turbine engines. This isn't always a case of Space Is Noisy (because they're probably still in the pressurized hangar) but it's definitely common.

This is closely related to Red Alert with its attending imagery of lights flashing and klaxons sounding as the pilots in their flight gear race for their fighters while the ground crew calmly preps them for take-off as their commander goes over the PA with something like "All fighters, Scramble!"

This can be combined with a Lock-and-Load Montage, with the pilots suiting up and flight crew loading the fighters with fuel and ordnance before they take off.

In anime, you always have to have the commander gesture impressively on the Bridge when they do this. In fact, this usually shows up in the Opening Credits.

Sometimes this trope is subverted, with the pilots attempting to scramble only to have their airfield or mothership disabled or destroyed before they can launch. That would be an example of Sitting Duck.