Voice of the Legion 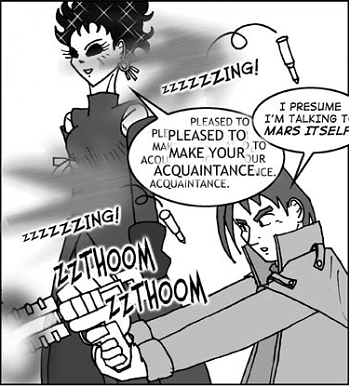 Since when could planets talk?
"Black Mage has got some sort of screaming demon background noise reverb thing going on with his voice. I think he just wants attention."
— Fighter, 8-Bit Theater
Advertisement:

Evil characters get a lot in the way of cool toys, powers, and even wardrobe options, but one of the coolest additions a sufficiently evil and powerful character gets is being able to speak with the Voice of the Legion.

The character's voice gains a reverberating Echo, sometimes a completely different voice(s) speaking in tandem and just slightly out of sync, almost mathematically calculated to just be able to distinguish one another. The character's voice will often drop a tritone or a full octave and become deeper, though even a falsetto can become jarringly creepy with the reverb alone.

The cause can be anything from channeling spirits, a "Freaky Friday" Flip situation, Demonic Possession, or an Eldritch Abomination (or its servants) deigning to speak in English rather than the Black Speech, except their accent bleeds through (like blood from the throats of so many virgin sacrifices) and makes the English they speak in sound positively scary and nightmarish. This is distinct from the Creepy Monotone in that the character may not speak in a monotone, but the voice itself is creepy.

If the individual speaking is possessed, this may be an indication that there are Many Spirits Inside of One. (Or it could just be one with a really creepy voice.)

Heroes or good characters can use this power, Dark Is Not Evil, after all, and the possessing/channeled spirits might not be evil. Often, a good character will get this from performing a Fusion Dance with another good one, rather than a Demonic Possession. Gods, especially the Abrahamic one, are often portrayed with such voices, as well. Either way, this character is not to be trifled with.

This trope is named for I Am Legion, the mental version. Sometimes this overlaps with Voices Are Mental. May contain Vader Breath, may be used when Hearing Voices. Contrast Speak in Unison, where many people speak as one. Compare Guttural Growler, Evil Sounds Deep, and Evil Sounds Raspy.

Example of:
Grand Theft Me