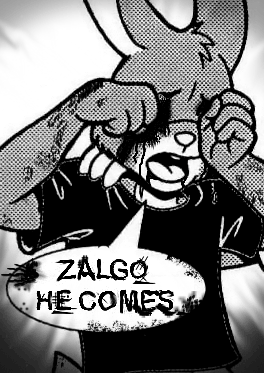 Zalgo is essentially what happens when you combine a Lovecraftian Eldritch Abomination with modern-day Internet Memetic Mutation and a dash of meta sensibility. Its origins are two strip hacks, one of Nancy wherein she invokes him

to get out of "walking Aunt Fritzi's turds," turning her and a boy with her into monsters, and another of Archie whrerein Mr. Lodge tells him and Veronica

to be wary of Zalgo and the end times, with a final panel of his pupils dilated, against a black background, screaming "ZALGO!"

The idea behind Zalgo is that he/she/it represents corruption. Corruption of innocence, corruption of normality, corruption of the world as we know it, the list goes on but you get the idea. Zalgo is the embodiment of that which is right decaying grotesquely into something very wrong.

The internet meme is to have corrupted text indicating its approach. We won't burden you with the font on this site, but you can see it here. This site

will let you easily Zalgo-ify text. If your browser has trouble rendering the Zalgo text, try here