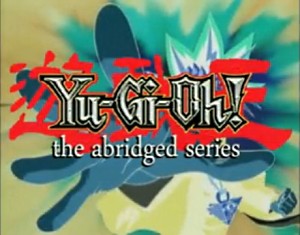 Yami Yugi: Wait a minute! Did you just summon a bunch of monsters in one turn?
Seto Kaiba: Yeah. So?
Yami: That's against the rules, isn't it?
Kaiba: Screw the rules, I have money!
— Episode 1

Yu-Gi-Oh!: The Abridged Series (The Cancelled Series for the Virtual World arc and The Renewed Series for the next arc after that) is a Gag Dub and Affectionate Parody of the second anime series of Yu-Gi-Oh! (the one most commonly known around the world), done by a guy known as LittleKuriboh (real name Martin Billany

). Each episode of this series compresses several clips of YGO episodes into four- to eleven-minute clips, which point out and make fun of some of the really absurd plot points of the series (just how does Kaiba manage to climb that cliff with a briefcase in his hand?) and a lot of the changes made in the 4Kids dub ("Don't move a muscle, or we'll shoot you with our invisible guns!" "It is heavily implied that you are beating the ever-loving crap out of me!"), as well as lampooning the policies of the television networks that aired the show in North America.

The Abridged Series spawned a handful of imitators, but has since become an entire genre of internet videos and thanks to its expressive parody, quotes from the series are repeatedly used on this very wiki. As well as by a few of the actual voice actors. The series itself has been re-fandubbed or subbed into French, Portuguese, Swedish, Polish, Arabic

and, of course, Japanese (among others).

After some time LittleKuriboh eventually went to doing the same process with "Season 0" (the Short Runner based more closely on the original manga), giving special attention to the Adaptation Displacement and animation quirks of the earlier series. He has also abridged the first-series/"Season 0" movie and the second-series movie.

Videos of each episode can be found at the official website

has been terminated and reinstated a ridiculous number of times. note  Seriously, we stopped counting after the tenth time. Current status: NOT BANNED. Also note that the current channel was originally made as a joke to be Yugi's in-universe channel; the original channel for the series too, was banned and unbanned repeatedly, which is why the show was moved. There is also his side channel ObeyMyRod

, home of the Marik Plays Bloodlines videos, and Ninjabridge, which features many jokes and cameos from YGOTAS (albeit with more uncensored swearing).

Additional subpages include Ho Yay and Shout Outs. An Episode Guide is under construction, please contribute!

This work is the Trope Maker, Trope Namer, and Trope Codifier for:

...In a few hours, the sun will rise!
Feedback

Screw The Rules, I Have Money

Yami Yugi complains to Kaiba that he summoned 3 Blue Eyes White Dragons in one turn, which is against the rules of the Duel Monsters Children's Card Game. Kaiba's immortal response named this trope.

Example of:
Screw the Rules, I Have Money!

Screw The Rules, I Have Money

Yami Yugi complains to Kaiba that he summoned 3 Blue Eyes White Dragons in one turn, which is against the rules of the Duel Monsters Children's Card Game. Kaiba's immortal response named this trope.