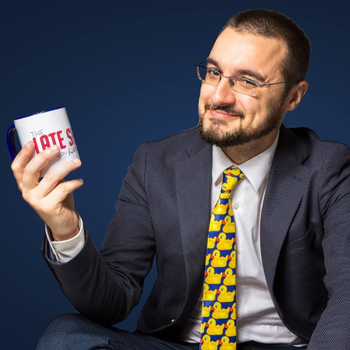 Yotobi, Karim Musa’s alias, is an Italian internet reviewer, and he’s pretty much the go–to online Caustic Critic when it comes to this kind of Video Review Show among the Italian audience.
Advertisement:

His style is, more or less, the one popularized with The Nostalgia Critic and The Angry Video Game Nerd, as he reviews both sucky video games and (especially) just as sucky movies. However, his style evolved soon enough into something more unique, which is most likely helped by the "Universal Squallor" logo standing for an actual studio. Said studio was never actually meant to be entirely about reviews in the first place. Yotobi himself said so.

However, we were talking about the stuff he reviews. Yep, sucky stuff. How sucky, you ask? Well, so far he has reviewed Big Rigs: Over the Road Racing, the infamous E.T. video game, Epic Movie and Disaster Movie, Birdemic, Mega Shark vs. Giant Octopus, Manos: The Hands of Fate… the list goes on.

However, in late 2013 Karim announced his decision to abandon his Caustic Critic format, as he felt it no longer fitted his creative vein. As a huge admirer of stand-up Stand-Up Comedy, he dedicated himself to a new video format loosely based on it, called Mostarda ("Mustard"), and realised several vlog series as intromission; he consequently reduced his reviews to a limited occurence on special occasions.

Finally, in 2016, he started his current format, The Late Show con Karim Musa, a pseudo-Late Night Talk Show, which saw frequent collaborations with other Italian Youtubers and notables from showbiz. And he finally updated his profile pic on Youtube after almost 10 years.

His channel is right here

. Subtitled versions of some of his videos can be found here