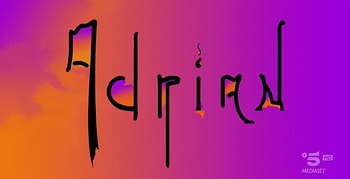 The logo of the animated series
Advertisement:

Adrian is an Italian animated series with an interesting backstory behind it which, possibly, will be even more well-remembered than the cartoon itself. And, alas, not exactly for the right reasons...

In a bombshell, the series was born from an idea of the famous italian singer-actor-producer Adriano Celentano

, with the script worked on by Vincenzo Cerami (screenplayer of Life Is Beautiful) and based on artworks from Milo Manara

. On paper, this sounds like the stuff of dreams, given that many people thought of this as a gran return to the screen of Celentano, who had seemingly faded quietly from TV, right?

Celentano had been planning the series since 2005, and officially started to work on it with the satellite television platform Sky Italia in 2009: originally, a 26-episodes series was planned for 2011, for a total budget of 13 million euros. As soon as 2010, Celentano required an extension, due to a series of production problems, while the animation was entrusted to SEK Studio (the same ones behind The Legend of the Titanic and its sequel Tentacolino). In 2012, when Sky pressured the Clan Adriano (Celentano's company) to keep their part of the bargain, Celentano tried to ask for another extention, or at least reduce the series from 26 to 13 episodes, but Sky had enough and Adrian was cancelled, and both sides sued the other. Luckily enough, mass-media company Mediaset took an interest in the series and in 2015 announced that Adrian would finally hit the screens on spring 2016. Still, the troubles were far from over, as they were forced to shift the date as in that period Adrian had just published a new musical album. Finally, in 2018, the series was ready to launch, and was on air in 2019, having being reduced again to nine, much longer episodes.

The story is set in 2068, in a dystopian and corrupt Italy where the Government brutally enforces the law, conformism is mandatory and violence against women, immigrants and the poor is a daily matter of fact. Adrian is a calm and relaxed watchmaker who has his shop in Via Gluck, and is in love with a woman named Gilda. One evening, during the concert of arrogant rock star Johnny Silver, he's given 15 minutes of fame and allowed to sing whatever he likes. Adrian's following song, "I Want to Know", is a hit and makes him incredibly famous with the people, but at the same time attracts the attention of the police, who see him as a dangerous subversive and fear his potential to rouse the masses. Soon enough, Adrian is a wanted man, but also an icon of truth, justice and rebellion that open the eyes of people. It's also revealed that he secretly fights crime as a masked vigilante named "Volpe" (Fox).

Each episode was preceded by a live-action show, Aspettando Adrian ("Waiting for Adrian"), where various famous comedians perform in sketches based on topics such as immigration or domestic violence, with Celentano himself as one of the guests. Unfortunately, things went south pretty much on the first airing, with an incredibly disappointing share of 19,07% which gradually lowered over the course of four episodes until it hit the rock bottom with a 7,66% rate. The results of Aspettando Adrian and Celentano's long awaited return were considered incredibly underwhelming (he appeared in the last 10 minutes of the first episode and only said 15-16 words maximum, then sung his songs in the next two episodes and in the last he didn't even bother to show up). Many critics were unbothered by the cartoon itself, considering it a bland Cliché Storm and pretty much a Self-Insert Fic with Adrian as The Ace, while the animation, at points good and at others bad, wasn't considered worth the 28 million budget spent on it. Add to this some big controversial and downright offensive content of certain episodes and you can see why this show was quickly shoved back in the shadows, under the pretense of a health-induced hiatus, even though rumors of a second appearence in autumn were released, but reputed unlikely.

After a long hiatus, the series resurfaced in November 2019, with the live-action part Aspettando Adrian replaced by another simply called Adrian Live - Questa è la Storia ("That's the Story", a lyric from the song "Il ragazzo della via Gluck"), featuring a different format with Celentano himself actually partecipating more amongst the other moderators and celebrities, while all the remaining cartoon episodes were run until December 2019. However, this revival was met with disinterest, as the long-delayed fifth episode was welcomed by a meager 10,44% of share, and no signs of recover in sight. As of today, many people consider Adrian a good example of What Could Have Been... which sadly has Gone Horribly Wrong. It was also reviewed by Yotobi.