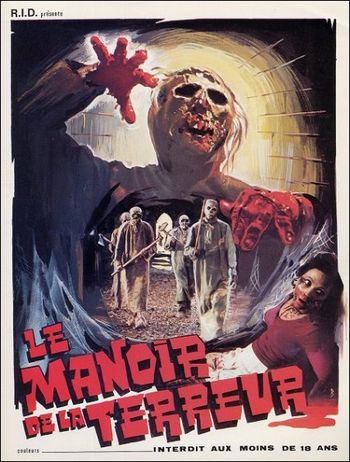 Ed Wood, eat your heart out.
The earth shall tremble....
graves shall open....
they shall come among the living
as messengers of death and there shall be
the nihgts [sic] of terror....
— "Prophecy of the Black Spider"
Advertisement:

Burial Ground: The Nights of Terror (1981) is a Zombie Apocalypse movie from Italian horror and giallo director Andrea Bianchi. It's best known for its exceptionally bizarre, tool-using zombies, and Peter Bark. Mostly for Peter Bark.

The movie begins with the good Professor Ayres making an unspoken but profound discovery during the study of an Etruscan cave, which prompts him to hack away at the cave wall with a pickaxe. Then some zombies show up out of nowhere. He tells them that he's their friend, but it doesn't work: they tear him apart and eat his flesh.

Meanwhile, three young couples arrive at the Professor's country mansion, one of which has a child named Michael (played by the legendary Peter Bark). After a night of softcore sex, the couples wander around the grounds, taking photographs, and wondering where Professor Ayres has gone. Inside the house, light bulbs start exploding for no reason at all except to shock the servants. Zombies then start rising from some very shallow graves and attack. The characters barricade themselves inside the mansion, but to no avail—the zombies locate the tool shed, and eventually break through the doors with a battering ram. Oh, and also, Michael tries to seduce his mother.

Despite the title, the entire movie takes place over a single night.