Film / Riki-Oh: The Story of Ricky 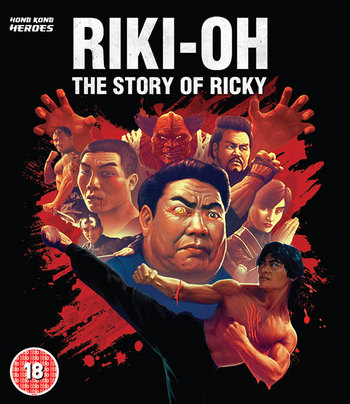 Seppuku has never been more deadly.
"The alternative script for a logical Story of Ricky was two pages long, one of which consisted of the words "Ricky goes to prison, then decides to leave." The other was just a graphically detailed crayon drawing of a smashed brain."
— Cracked, "The 5 Most Ridiculous Martial Arts Movies Ever"

In 1991, the same year that Tsui Hark made Once Upon a Time in China, a film that re-defined martial arts cinema as a dignified and genuinely artistic medium that portrayed kung fu as a metaphor for Chinese cultural pride, along came Lam Ngai-Kai, an obscure Grindhouse director. With the rights to a manga called Riki-Oh in one hand and a shoestring budget in the other, he set out to make the most faithful live action adaptation of a manga ever. 9 disastrous over budgeted months later, The Story Of Ricky was born.

Ricky (or Lik Wong in the original Cantonese version) was your typical red-blooded college kid with the strength of twenty men and ass kicking kung fu, who like nothing more than to frolic with his innocent girlfriend Anne (or Yin Yin) and play the flute all day long. That is until his uncle came and taught him Qi-Gong, a technique which hardens his body to damage by throwing grave markers at him. Unfortunately, his uncle forgot his own preachings of "Chi-Gong requires you to control your temper" when he taught Ricky the forbidden technique. Before you can say snap-crackle-and-pop, Anne is almost raped by a drug dealer and runs off a roof to escape. Ricky instantaneously loses his cool and then proceeds to literally snap-crackle-and-pop the drug dealer with his stone-shattering strength.

Our story starts when he is sent to prison. To quote the narration "By 2001 AD, capitalistic countries have privatized all government organisations. Prisons, like parking lots, have become franchised business." This basically means that since the prisons run themselves with no government interference, the wardens are allowed to be as damned sadistic as they like to the innocent inmates through "trustworthy" inmates, who enforce the rules.

After witnessing a helpless old man getting his nose shaved off by Samuel (aka Wild Cat), Ricky decides to trip the bastard over and have a dummy that does not look even remotely like him nail his hand to his face on a conveniently present board-with-nails. The next day, Samuel hires a literal horse-eating fat assassin called Zorro (or Silly Lung) to get Ricky in the showers. No, not that way.

After that All Fucking Hell Breaks Loose.

Did we mention that every other prisoner, warden and guard, who is not Ricky gets popped like a balloon with one punch by our hero?

An unintentional classic of comedy cinema, which proceeded to destroy the director's career, doom the leading actor to B-movie mediocrity (until a marvelous recent turn as a villain in Ip Man), and be picked up by an American distributor to be given the most lovably hilarious dub to a Hong Kong movie ever.

Tropes Associated with The Story of Ricky

You are all free now!

Alternative Title(s): The Story Of Ricky