Film / A River Runs Through It 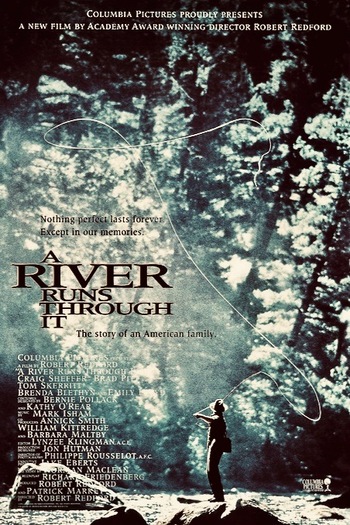 "I am haunted by waters."
Advertisement:

Set between World War I and The Great Depression, it follows the lives of Norman (Sheffer) and Paul (Pitt) Maclean, two brothers from Missoula, Montana who are as different as can be... except for a mutual love of fly fishing, a passion instilled in them at an early age by their father John (Skerritt), a stern but loving Presbyterian minister. The film depicts the brothers' changing relationship as they transition from childhood into adolescence and finally adulthood, while exploring themes of Transcendentalism along the way.

The film was well received by critics, with particular praise given to Redford's direction and Pitt's star-making performance as Paul. It won an Academy Award for Best Cinematography, and also received nominations for Best Original Score and Best Adapted Screenplay.