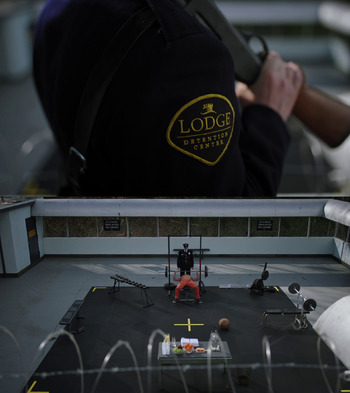 That may as well not be prison. It belongs to Hiram after all.
Hannah: According to the Title III warrant, Duvall was approved for its first ICE contract only about two years ago.
Gregorio: Business is booming for all these private facilities. It's a growth market.
Hannah: It's so hard to think about this as a for-profit industry.
Gregorio: It's big business. ICE can only do so much with the resources they have.
— NCIS: New Orleans
Advertisement:

Any prison or jail under the control of someone other than the government for profit. Such a prison is usually owned by a megacorporation or any sort of large business.

In fiction privately operated prisons tend to get very negative portrayals. A prison setting is already pretty dark and then you introduce the possibility of a Corrupt Corporate Executive running it, with Human Traffickers as their Mooks. Prisons and corporations are both seen as dehumanizing and treating people as objects. Combining both can lead to a nightmare scenario.

Such prisons often go hand-in-hand with slavery, using the prisoners as cheap labor and Human Trafficking and not allowing them any other options. A common feature of a Privately Owned Society. May be connected to a Law Enforcement, Inc. If the existence of this prison is a secret, then you have a Black Site on your hands.