Film / Tales from the Hood 2 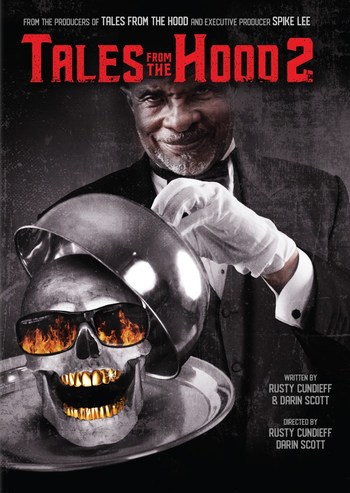 At some unknown time in the future, Dumass Beach is a prison operator who is constructing an army of AI "Robo Patriots" which can learn from firsthand experience as well as from secondhand stories and function as law enforcement officers. He recruits the great storyteller Mr. Simms (Keith David) to fill their heads with information from his stories to help them better determine who is a criminal and thereby fill his prisons, suggesting "Black Lives Matter" as the theme.

Good GollyBest friends Zoe and Audrey take a trip inside the “Museum of Negrosity”, where they learn first hand about the vast and troubling history of racist iconography as they walk in and out of rows filled with a plethora of xenophobic historical evidence. The museum's collection includes a giant, exaggerated character of color on the wall whose mouth serves as a doorway, a ‘children’s book’ filled with prejudiced perceptions of young black boys, and even a shout out to the infamous voodoo puppet from the “KKK Comeuppance” segment in the first film. But all Audrey wants is a golliwog known as "Golly Gee".

When the museum owner refuses to sell the doll to her, explaining how “slave owners used to brand people, but when people became free, they used pen, ink, and art to brand people in new ways”, Audrey argues that the doll isn’t offensive simply because she grew up with one in her household. Still, the curator sticks to his guns, so Audrey takes it upon herself, along with her brother Phillip (Andy Cohen) and a reluctant Zoe to break into the place after dark and steal what she deems rightfully hers. When the doll comes to life and grows to human size, Audrey's decision becomes one she’ll regret the rest of her life – although to be fair, as a result of her ignorance, she doesn’t have much longer to live.

The MediumThree hardened gangsters are beating a man to death in the privacy of a private parking garage as he sits bound to a chair, but he still won’t tell them where his money is. The man in the chair, Cliff Bettis, used to be a notorious pimp back in his prime, but that world is behind him now. All he wants to do is take his five million dollar fortune and use it for establish workplaces, schools, and charitable organization to improve the lives of the next generation. After making a wisecrack that goes a touch too far, one of the gangsters beats Cliff to a lifeless pulp, leaving the other two men without a cash prize or a person to hit for information. Desperate, the trio decide to invade known TV psychic John Lloyd’s (Bryan Batt) house and hold him hostage until he agrees to host a séance and help them channel Cliff to finally figure out where he’s hiding the bounty. Unfortunately, their plans go askew when Cliff does enter the medium’s body and refuses to leave, answer their questions, or do anything but return the favor they bestowed upon him when they decided that greed and power were more important than encouraging a positive change within the toxic environment that birthed them into the criminals they are today.

Date NightTwo notorious players, Ty and Kahad, fib to two attractive aspiring actresses, Carmen and Liz, that they are casting directors, looking for possible subjects for their upcoming projects. Once the bait is on the hook, the pair mosey on over to the ladies’ surprisingly lavish estate, starting out the evening with a harmless game of Cards Against Humanity, but ending it with a dangerous dose of GHB. As the guys set up their tripod to film their latest conquer, an act which, judging by their casual ritualistic routine, has happened many times before, they witness for the very first time the tables being turned, as the women suddenly turn into vampires and bite back – both literally and figuratively.

The SacrificeIn the year 1955, two white men pick up two young African Americans, drive them to an isolated location, and viciously assault them. In the present day, an African American councilman named Henry Bradley and his white wife Emily, who has become crazed with pregnancy blues, hears Emily claim that the ghost of a boy in their front yard is coming for their baby. Concerned with appearances for his boss’ campaign, Henry shuts Emily up in her room while he hosts a gathering downstairs for William Cotton, the politician for whom he’s organizing a support group, and hopefully gaining many votes in their favor.

Henry fails to heed his mother’s warnings about supporting a man who is so overtly racist in the name of power and financial gain, and as a result, he is confronted by the apparition of the little boy who was beaten to death in the 1955 – none other than Emmett Till, a real life victim of skin based hatred. Fourteen-year-old Till was infamously murdered by a gang of white men during the 1950s after he had spoken to a white woman, and his mother responded with an open casket at his funeral to show the world the injustice that had been committed. Most historians would argue that this moment helped spark the Civil Rights Movement, ultimately paving the way for voting rights and equal treatment for African Americans across the country. As the ghost of Till stands in Henry’s front yard, questioning his morals for supporting a man who wishes to take away what he died for, he gives the traitor two choices: either step down as the campaign manager for Mr. Cotton, or bear the repercussions of history becoming undone in the name of cowardice. Henry must make a sacrifice, just as Emmett did years ago, or else all of the fighting the men who came before him carried out will have been in vain.

Tales from the Hood 2 provides examples of: