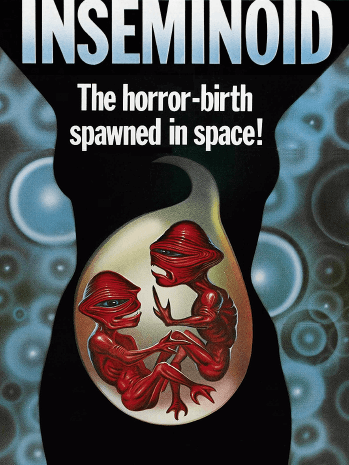 Usually, motherhood is seen as something nurturing and life-giving. It's something to look forward to. Babies Make Everything Better, after all. Except in this case. This is when things get bad, creepy, or downright terrifying. Like its counterparts Eye Scream and Body Horror, this trope is dependent on the Primal Fear of things going wrong with a pregnancy, taken to disturbing levels.

It's painful, traumatic, bloody, and potentially life-threatening. Babies may turn into grotesque monsters, which is common in works about fearing parenthood. This trope often carries supernatural elements, with women carrying literal devil-spawn or a Half-Human Hybrid, as somewhat of the evil version of a Mystical Pregnancy—most often, this supernatural baby is a Child by Rape. Rape scenarios are common even without the supernatural, however. Another theme that may occur is abortion or miscarriage. The imagery may also be entirely metaphorical, with references to wombs and pregnancy rather than anything explicit.

Super-Trope to Traumatic C-Section. Sister Trope to Imperiled in Pregnancy, where the horror isn't so much the pregnancy itself as what might happen during it.

This often makes use of Parasitic Horror and Rape as Drama. Can overlap with Face Full of Alien Wing-Wong, Womb Level, Spawn Broodling, Chest Burster, Abortion Fallout Drama, and Breeding Slave. Fetus Terrible is a specific example of this. See also Bizarre Baby Boom and Medical Rape and Impregnate.