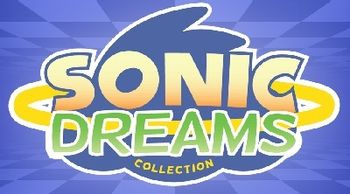 Sonic Dreams Collection is a fan-game created by Post-Modern developers Arcane Kids that poses as a series of four unreleased Sonic the Hedgehog games from 1996 to 1999 created by the fictional MJStudios. It includes a character creator, a prototype MMO, a movie maker, and a Dating Sim. There is also the additional SEGANET service that can be used to access online features on some of these games.
Advertisement:

The game actually serves as a parody of the Sonic the Hedgehog fandom, which is infamous for a large amount of sexual content and poorly created fanwork.

*NOTE: Due to the very Spoileriffic nature of this game and the fact that it is freely available to play, we highly recommend you play it or watch a Let's Play of it before reading this page. This game is made almost completely out of spoilers, so it's not worth hiding them. You Have Been Warned.*