Wolves Always Howl at the Moon 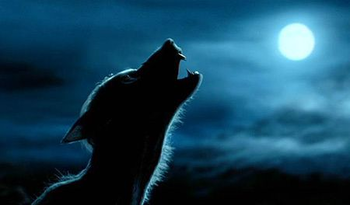 "Listen in awe and you'll hear him...
Bark at the moon."
— Ozzy Osbourne, "Bark at the Moon"
Advertisement:

In almost any work of fiction that features wolves, werewolves, or coyotes, the canine beasts will almost always be showing howling to the moon at night. On occasion this trope is applied to domestic dogs as well as their wild counterparts.

The howl at the moon is often used to show the power and mystery of the wolves. It also strays into a case of not doing the research because one, wolves howl to communicate, and two, wolves howl just as much during the day as at night.

This trope is often combined with Clifftop Caterwauling to provide atmosphere to a scene. Bonus points if the wolf is silhouetted against the moon.

If the howler is a werewolf, this usually occurs right after they transform.

Other creatures are occasionally shown howling at the moon, but wolves and werewolves are by far the most common.

Compare Howling to the Night which is when a wolf's howl is used to signify the change from day to night. See also Howl of Sorrow, for when a howl is used emotionally.