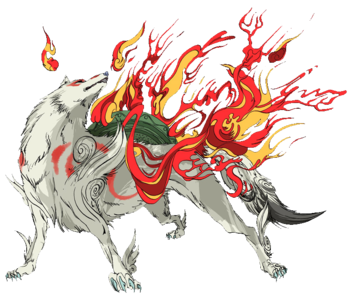 White as snow, and best in show.
For much of Western human history, wolves were portrayed as bloodthirsty monsters or as big bad villains. Gradually, over time, this view point became challenged as wolves became less common and people less cautious of them, with more positive depictions of wolves as noble, but untamed creatures eventually arising. But how do you make characters who have been portrayed for so long as evil look good? Simple, make them white.
Advertisement:

White is often associated with light and goodness and by making a wolf white, audiences are given the indication that this wolf represents the qualities of their fur coat. Some white wolf heroes are normal wolves who are the main heroes of their work; other times they are deities of wolves or of nature.

Real life white wolves are no different from wolves of any other color, but they are a dazzle to behold. They can usually be found in Canada, Alaska, and sometimes Minnesota. Unless you're Too Dumb to Live (or someone has a white pet wolf), do not go up to a white wolf and treat it like a dog.

Subtrope of Noble Wolf and Light Is Good. Compare White Stallion and Great White Feline, other animals that are assigned importance because they are rarely pure white. White Bunny also involves a white animal, but is more commonly white and has innocent connotations instead.

Aside from her fairy nature, Aisling distinguishes herself from the rest of her pack, with her white fur, signifying her unearthly nature compared to them and the rest of the characters.

Aside from her fairy nature, Aisling distinguishes herself from the rest of her pack, with her white fur, signifying her unearthly nature compared to them and the rest of the characters.