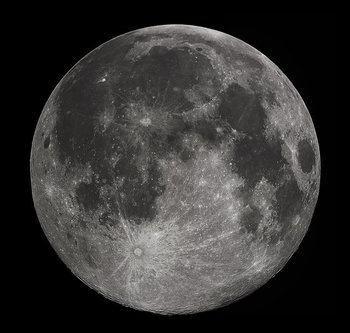 Hope you brought your oxygenated taffy.
Profile
Advertisement:
"But why, some say, the Moon? Why choose this as our goal? And they may well ask why climb the highest mountain? Why, 35 years ago, fly the Atlantic? Why does Rice play Texas? We choose to go to the Moon. We choose to go to the Moon in this decade and do the other things, not because they are easy, but because they are hard!"
—John F. Kennedy's "Address at Rice University on the Nation's Space Effort"

Earth's only — or at least, only significant — natural satellite. That we call it the Moon testifies to its discovery long before any others. In English, it is sometimes called by its Roman name, Luna, when differentiating it with the other satellites in the Solar System. It has been named Selene, Cynthia, and Diane by the Roman and Greek ancients as well. Of course, this is where the word "lunar" comes from, as well as the Greek prefix seleno- (e.g selenophobia, fear of the Moon.)

It orbits our planet some 400,000 kilometers away, taking 27.3 days to go all the way around once. Since the Earth will have moved some distance around the Sun by the time the Moon has orbited once, it takes a little longer — 29.5 days total, to be precise — for the lunar light-cycle to get back around to the same phase it started in. You will note that this is approximately one month, which is no coincidence. Tidal forces long ago caused the Moon to lock in synchronous rotation with the Earth, so that the same side is always facing us.

Compared to other moons in the Solar System, Earth's Moon is really huge compared with the planet it orbits, weighing in at a whopping 1/81 of Earth's mass and 1/6 of Earth's surface gravity. By comparison, even the largest moon of Saturn is only 1/4000 of Saturn's mass. The Moon also has roughly 2/9 the mass of Mercury, and is about 1.8 times more massive than all five recognized dwarf planets (Eris, Pluto, Makemake, Haumea, and Ceres), Pluto's satellite Charon (which is more massive than Ceres), and the Asteroid Belt (Ceres excluded) combined. Among The Moons of Jupiter and Saturn, only Ganymede, Titan, Callisto, and Io are more massive than the Moon. Of them only Io is dense enough to have a higher surface gravity than the Moon. The Moon is so large in comparison to the Earth that the center of gravity between the two is about two thirds of the Earth's radius out from its center, causing the Earth to noticeably wobble around it. This has led some to believe the Earth-Moon system should be considered a double planet, although this is heavily disputed due to the fact that the center of gravity remains within Earth's interior.

The surface gravity on the Moon is 0.17 g, which is 17% of Earth's gravity. It's so far the only gravity on another world that was experienced directly by astronauts, so naturally, you would feel very light and be able to jump higher too like they did.

Currently, our best guess at how such a humongous companion came into existence is that a Mars-sized planetesimal struck the Earth early in its formation period, which knocked loose a huge chunk of material that eventually cooled, congealed, and settled into the Moon's current nearly-circular orbit. New discoveries support this theory, as scientists have found evidence that the Moon was tidally locked only a hundred days after the collision, "baking" one side of the Moon, with the other side thickening from the vaporized crust, explaining the odd crust dichotomy of the satellite. In addition, the Moon and the Earth share the exact same isotopes. Even more amazingly, the "strange lights" that have been seen in the last few decades are probable indication that the Moon's core is Not Quite Dead, such as the flashes of light from Aristarchus, one of the ancient lunar volcanoes. In reality, instead of being UFO's, it's actually the heated expulsion of dust from the Moon's crust.

The Moon has been with us since before the dawn of the human race, progressing through its utterly predictable phases night after night. For most of human prehistory, it was the only light source available to us at night, which lent it a good deal of mystique. Lunar deities are almost as prevalent as solar deities in mythology. The fact that the Moon's 29-and-a-half-day light cycle is very similar in duration to the average woman's menstrual cycle has also not escaped the notice of poets, philosophers, and biologists; indeed the moon is often associated with femininity in literature and myth. However, there are more male lunar deities than female lunar deities. While Greeks and Romans considered the moon a woman, to the Germanic peoples it apparently was a man, which is how we get The Man in the Moon.

Loss of personal control and going berserk are also associated with the full Moon, and not just when dealing with werewolves; the very word "lunatic" refers to the Moon.

The Moon is also the major cause of tides on the Earth. When the Moon is directly above you or directly below you (i.e. on the opposite side of the Earth), tides are highest; when it's 90 degrees off to one side of you, tides are lowest. The Sun also causes tides, but these tides are much weaker than the Moon's.

The Moon's surface is covered in craters, caused by comet and asteroid impacts in the ancient (and, occasionally, recent) past and that range in size from tiny craterlets seen with microscopes in the lunar rocks brought by space missions to large basins with concentric rings of mountains and sizes of up to 2,500 kilometres (the South Pole-Aitken Basin, one of the largest impact craters known in the Solar System). Each of those craters has a name, and most are named after scientists and philosophers. For instance, the great big crater with the huge white rays coming out of it in all directions is Tycho Crater, named after Tycho Brahe

. The moon's surface is also partially covered by "Seas" (maria in Latin), a relic of the early days of telescopic observation when they were thought to be large masses of water, dark areas where ancient volcanoes spilled lava all over the place and that in most cases correspond to big craters similar to the already mentioned South Pole-Aitken Basin but smaller, excavated by massive asteroid impacts. Like the craters, each Sea has a name, but unlike the craters the Sea names are derived from things that sailors might be concerned about — the Sea of Tranquilitynote Mare Tranquillitatis, the Sea of Rainsnote Mare Imbrium, the Sea of Fecunditynote Mare Fecunditatis, etc. Another interesting note is that the Moon does have a thin atmosphere, called an "exosphere". It's visible when there's a new moon and the Moon shows off a sulfurous "tail"note Studies

of the rocks brought back by the "Apollo" missions show the Moon to have had between 3 and 4 billion years ago an atmosphere twice as thick as Mars' current one produced by volcanism, that was stripped away by the solar wind

Despite how bright the Moon may appear in the night sky, its surface is very, very dark. Its albedo is a dismal 7%, which means that 93% of all incident light is absorbed without being reflected back into space. For comparison, Earth's albedo is around 38%. The difference in color between the light-colored regolith and the dark-colored maria is like the difference between coal dust and extra-dark coal dustnote However the night sky is even darker, and that contrast causes the Moon to stand out considerably. Moonlight is also not bluish or silver but actually redder

Since the Moon keeps the same face pointed toward Earth at all times, the far side of the Moon can't be seen from the Earth's surfacenote Lunar librations

allow us to see a bit of the lunar far side and it wasn't until the advent of the first space probes that we had any idea what the far side looked like. (It's got a lot less maria and a lot more craters than the near side; the slightly greater density of the dark maria material may be why the maria-rich side ended up facing Earth.) Both the near side and the far side wax and wane through light-and-dark phases, so it's incorrect to call the far side "The Dark Side of the Moon" except during the brief period every month while the Moon appears Full in Earth's skies.

Sadly, the Moon will not be with us forever. Those same tidal forces that pull on the Earth's oceans and locked the same face of the Moon toward the Earth are also, very slowly, widening the Moon's orbit. note Currently, every year the Moon is about 2 inches farther away than the year prior. In a short time (on a geological scale, at least), the Moon will be too far away to cause total solar eclipses. note Which actually results in a interesting phenomenon: we are currently in a phase of the Moon's orbital life that results in the Moon just being able to cover up the Sun during an eclipse. For the dinosaurs, though, the Moon would've completely blocked out the Sun easily. Eventually, it will be far enough away to leave Earth orbit entirely, and wander through space just like in Space: 1999, though by the time that will actually happen, the Sun will have expanded into a red giant and engulfed the Earth already.note However, the tides caused by the Moon are slowing down Earth's rotation and in theory in the far future our planet could end instead being tidally locked to the Moon. After this happens, it has been proposed that tides caused by the Sun could cause the Moon to approach our planet again — very slowly — until it gets so close

that it's destroyed by Earth's gravity, becoming a ring system similar to Saturn's one but much smaller and denser. Note that those points are just academical since it's unlikely both the Earth and the Moon will survive the Sun's expansion into a red giant up to the Moon ending up destroyed that way due to interactions with the Sun's bloated atmosphere, and they'd take place in a far longer timescale.

Examples with the Moon as a place