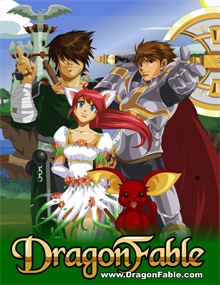 DragonFable is a single-player RPG taking place in the fantastic world of Lore. The player has to fight to protect the world from the forces of evil and solve the strangely confused prophecy of the White and Black Dragon Boxes. He/she battles the strangest creatures ever to spawn in Lore, including Sneevils, Chickencows and the dreaded Sepulchure, a Fallen Hero who succumbed to The Corruption!

It also chronicles the life of a noob knight called Ash Dragonblade as he journeys to save his Damsel in Distress.

See also AdventureQuest, to which it is a prequel Alternate Continuity, and the other games by Artix Entertainment: MechQuest, AdventureQuest Worlds, WarpForce, EpicDuel and HeroSmash.