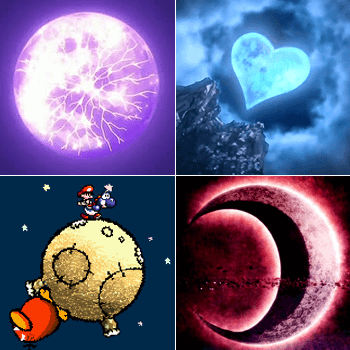 The Moon. Our planet's only natural companion, the brightest object in the night sky; worshipped as a deity by countless cultures; inspiration of poets, lovers, lunatics, and werewolves.

Depictions of the moon in fiction vary, and it can behave rather ... oddly.

For more moon tropes, see Index on the Moon. For more on eclipses, see Total Eclipse of the Plot.

For weird moons caused by artistic stylization, see Artsy Moon. If the moon has actually been physically altered to change its appearance, it's Deface of the Moon. When the moon alters others comedically, see Moonburn. See also Weird Sun, The Stars Are Going Out, Alien Sky, and Frequently Full Moon.