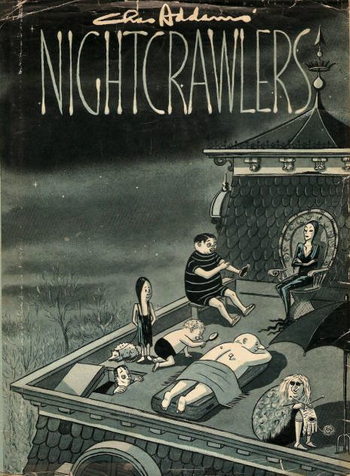 Sheldon: I should've brought an umbrella.
Leonard: What for? It's not going to rain.
Sheldon: I know that, but with skin as fair as mine, moonburn is a real possibility.
Howard: [beat] That's a bazinga, right?
Sheldon: One of my best, don't you think?
Howard: [beat, laughs nervously]
— The Big Bang Theory, "The Lunar Excitation"
Advertisement:

For the sake of funny, a character goes out on a nice, peaceful night. But oh no; they forgot their moonscreen! Now they'll get a severe moonburn and then they'll be in real-trouble!

Moonbathing is a pretty common practice among weirdos and nightowls, and fiction usually portrays it as being just like sunbathing.

The moon itself only gives off 7% of the sun's harmful rays, but some characters have a bad habit of getting burns or worse when exposed to it for too long, and there always seems to be a cream to protect themselves from it. Fewer examples even suffer from the same affliction with other natural phenomena, from clouds to planetary alignments and other such wibble-wobble.

Sean's parents made him bring 'moonblock' to a sleepover, saying that he can't be too safe.

Sean's parents made him bring 'moonblock' to a sleepover, saying that he can't be too safe.