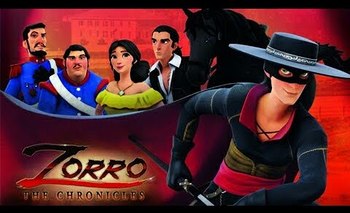 From left: Monasterio, Garcia, Ines, Bernard, Tornado, and the man himself.
Advertisement:

Zorro: The Chronicles is a 2015 CGI-animated series based on the popular Zorro franchise, created by French company Cyber Group Studios and produced in partnership with John Gertz’s Zorro Production International and Blue Spirit Studios for France Télévisions and Italy’s RAI.

The series' synopsis follows the familiar plot of Don Diego de la Vega (here a teenager instead of an adult like in most other adaptations, and voiced by Johnny Yong Bosch) returning home to 19th-century Los Angeles, California after having spent several years at school in Spain. Thanks to letters from home, he is forewarned that the army captain Monasterio has established a tyrannical rule over Los Angeles. In order to combat the corruption that awaits him and to defend the people, Diego decides to take on the masked identity of Zorro, foiling Monasterio and other villains as he embarks on his adventures in and around the town.

Diego pretends to be a philosophical lout who detests heavy work and is absolutely inept with the sword in order to distance himself from the mysterious masked outlaw who's charming, witty, and an absolute master of the blade. He's also aided in his efforts by his faithful friend Bernardo, who is mute and also pretends to be deaf in order to more effectively spy for Zorro, and his twin sister Ines, who utilizes Monasterio's one-sided affection for her to aid her brother's efforts on multiple occasions and is quite plucky herself.

The series ran for one season of 26 episodes.

Examples of tropes in this series include: