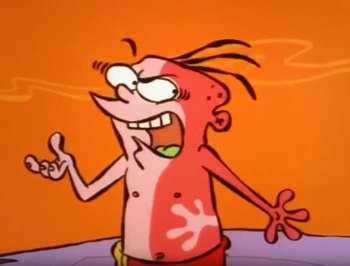 "Double-D! You nincompoop, you forgot the sunscreen!"
Advertisement:

One result from the Beach Episode is, unfortunately, sunburns. Always remember to bring sunscreen, enough of it, otherwise you may get some embarrassing words or images on your body (or, you know, skin cancer).

People who are Prone to Sunburn are especially likely to end up in this situation. This can also come from getting Trapped In a Tanning Bed.