Recap / My Little Pony: Friendship Is Magic S9 E13 "Between Dark and Dawn" 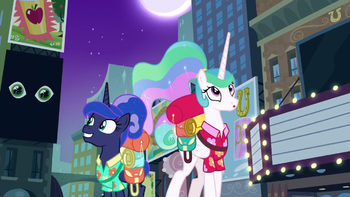 There's a lotta little things you gotta try in this world.
Princess Celestia: Remember, sister. From now on, we are regular, carefree ponies!
Princess Luna: We're leaving the princess life behind, and we're not even going to fly!
Written by Gail Simone
Advertisement:

Twilight and her friends work together to stop a giant tortoise that is eating the trees at Sweet Apple Acres. Applejack and Pinkie distract it long enough for Rainbow to fly Rarity into its face and tie a bow around its beak. Fluttershy gives the creature, seemingly named Mr. Tortoise-Snap, the Stare, calming it down and allowing Twilight to catch Spike, who had been caught up in the feeding frenzy. Just then, Princesses Celestia and Luna arrive, announcing they will save the day. They use their magic to send Mr. Tortoise-Snap off to other parts, but Twilight and her friends are confused. Over the next few days, the Princesses continue to intervene even when their help is not needed, and potentially overdoing their help.

The sisters reveal that they felt the need to get involved in saving Equestria as they get close to retirement, but Twilight explains they're overdoing it. Celestia and Luna agree to go on a vacation together as a way to spend their excess energy without the pressures of leadership. It would also be a good way for Twilight to practice for when they actually retire. Luna looks to relax, while Celestia is eager to see the world. They compromise and make a list of all their vacation plans, going back and forth between activities that the other wants to do.

On the day they set out, Celestia gives Twilight a magical device that will help her to control the sun and moon, as well as a list of their duties. The Princesses set off, and initially their travels are fun, but soon start to wear on each other. Luna gets tired of Celestia's unending excitement, while Celestia quickly bores of Luna's plans. It comes to a point where they start to argue over what to do next, and they both agree to travel alone for the rest of the trip after they use the Royal Canterlot voice on each other. Soon enough, Celestia and Luna realize they really wanted the companionship of their sister.

Meanwhile in Canterlot, Twilight and her friends struggle more with the duties left for them. These include arranging the Royal Swanifying Ceremony for the swans that live in the castle's moat. The problems with arranging this start to surmount rapidly; they have to decorate the palace and prepare for the celebration feast, keep the swans calm, and deal with striking trash removal ponies that have left piles of waste to build up on the streets. The problems start to overwhelm the Mane Six when Fancy Pants speaks up, giving them all advice to just calm down and to try to delegate the problems rather than fixing it all herself, something he observed the Princesses did. Together, they manage to deal with all the problems, including Pinkie bringing the giant tortoise to Canterlot to eat the trash, giving Twilight confidence she needed.

Celestia and Luna re-encounter each other and go to have a talk. Both know they really like spending time with each other, but also know their interests are different. They quickly reconcile and look out onto the night sky. Suddenly, the sun rises — and then the sun and moon start a strange dance. In Canterlot, Twilight has wrongly manipulated the magical device and in her haste to correct things, and accidentally breaks it. Celestia and Luna realize they need to get back and fly off towards Canterlot.