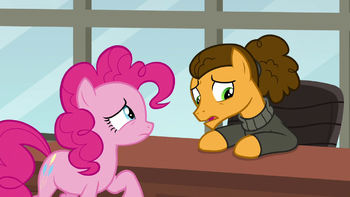 Cheese Sandwich is not his cheesy self.
Pinkie Pie: You lost your laugh? Is that some kind of joke? Because it's not a funny one.
Cheese Sandwich: It's not a joke. And even if it was, I... I wouldn't be able to laugh at it.
Written by Michael P. Fox & Wil Fox
Special Guest: "Weird Al" Yankovic as Cheese Sandwich

Knowing that Twilight's coronation is close, and that her other friends will have their own responsibilities for the rest of their lives, Pinkie becomes concerned that she doesn't really have a purpose in life. However, as she explains this to the others, she tells them that she wrote to her friend Cheese Sandwich for advice, and he has asked her to visit his joke/novelty factory.

When Pinkie arrives there, she finds the security rather tight until she introduces herself to the guards, who have been expecting her. Inside, she meets Sans Smirk, the manager of the factory. His dry demeanor and deadpan expression confuses Pinkie, as he doesn't seem the type to be running such a factory. However, he shows her the various gags and other toys being developed, as well as research being done into new comedic items; Pinkie finds this unusual as while they are funny items, it doesn't seem to be the type of stuff Cheese would have done. After the tour, Sans takes Pinkie to meet Cheese, who has lost most of his joy, and thus why he had written for Pinkie to come here.

Cheese explains that after he left Ponyville, he continued to throw custom parties for ponies across Equestria, but soon his services were more sought after, and it became difficult for him to keep up. Sans Smirk approached him with the idea of building the factory to mass-produce his novelties, and the business prospered. However, it soon became humorless drudgery for Cheese, who has become desperate for a way to laugh again. With help from Sans, Pinkie tests several new pranks and tricks on Cheese, but none of them succeeds.

As Cheese fears that his sense of humor is gone for good, several factory workers approach the office door to talk with him. He inadvertently makes a spoonerism, causing them to start laughing, and realizes that he needs to see ponies enjoying his jokes and pranks in person. Upon getting everypony in the factory to join in on the fun, including Sans, Cheese is overjoyed to regain his silly demeanor.

Cheese turns the factory's day-to-day operation over to Sans and ventures out into Equestria to spread joy again, promising to send in any new joke ideas he thinks up. Realizing that his purpose and hers are the same, Pinkie returns to Ponyville with a new determination to help her friends laugh when they need it.